Just a couple of minutes from the hustle and bustle of the A303 you can find yourself in the peaceful presence of the ancient Silton or Wyndham’s oak.

The Silton oak stands quietly in a Dorset Field

The small rural village of Silton lies just 2 or 3 miles South of the A303, near Wincanton. A quiet field behind St Nicholas Church is home to the stumpy Silton or Wyndham’s oak (grid reference ST78422936). With an impressive girth of nearly 10m it is thought to be in excess of 1000 years old.

Heidi and I investigating the hollow insides

Also known as Wyndham’s oak, after a Sir Hugh Wyndham (born in 1603) who bought the manor of Silton in the late 17th Century, this ancient specimen has a surprisingly gruesome past. In 1685 Charles II died and his Catholic brother James II succeeded to the throne. A revolt started in support of Charles II’s illegitimate son the Duke of Monmouth. The rebellion was suppressed and a rather sinister sounding chap called Judge Jeffreys was sent down to the South West to try the defeated rebels. Two such rebels were hung from this very tree!

Wyndham’s oak with St Nicholas Church in the background

It was quite common practice to use ‘Hanging’ or ‘gibbet’ trees back then. And Judge Jeffreys, it seems, was a big fan having hanged over 300 peasants! He left, “some places quite depopulated, and nothing to be seen in ’em but forsaken Walls, unlucky Gibbets and Ghostly Carcasses. The Trees were laden almost as thick with Quarters as Leaves.” 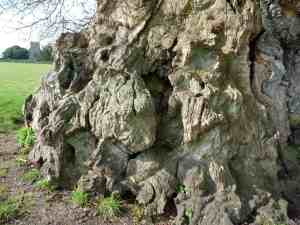 Still standing as a silent witness to our past, this ancient oak tree, like many others around the country, needs to be preserved and enjoyed as the green monument it is.

Much of the fascinating historical information above was taken from a must read book for all tree lovers out there, “The Heritage Trees of Britain and Northern Ireland”

Gazing at Trees and Stars at Mottisfont

Just before Christmas Heidi (my new Fiancee – not that there was an old one you understand!) and I visited Mottisfont Abbey for a crisp, wintery stroll around the gardens to see the ‘Stargazing’ sculptural trail that they’ve got on there until the 27th of this month. There is also an undercover exhibition inside the house called, ‘New Directions in Contemporary Craft’ in case of rain!

The grounds of Mottisfont are really lovely and the trail is a great way to invite people to give themselves a guided tour. The best thing for me is that it encourages people to actually use their eyes to search out the various sculptures. While some are hard to miss others are a little more tucked away. Here’s my favourite…

A hanging willow sculpture of shooting stars by Alessandra Cattaneo.

One of the other attractions to wonder at in the grounds of Mottisfont is a huge London Plane tree. Reputed to be the largest specimen in the country, it is very impressive indeed, even viewed as we did in its winter state of undress. 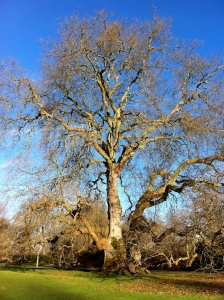 Believed to date from the early 18th century, in 1990 the Mottisfont Plane was measured at 40m tall with a massive girth of 12m and the area covered by its branches a whopping 1500m2.

Both the stargazing sculptural trail and the Contemporary Craft exhibition run until the 27th of January. The Great Plane will be there for many years to come!

I visited this ancient pollarded oak tree, on a fairly gloomy day, back in November 2011. 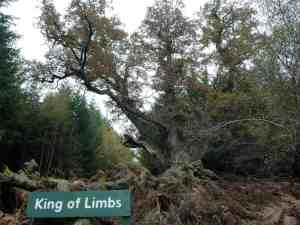 Hidden away down some muddy forestry tracks it would be tricky to find this tree without a map of the forest (available from the Marlborough library) or a local to guide you. Luckily I had both!

The King of Limbs is so called due to its huge spreading limbs. One of which has sadly broken off and can be seen lying on the ground in front of the tree. It is still a very impressive tree, thought to be around 1000 years old! Back in the day, the tree would have been used as a marker due to its wide spreading branches. Apparently its hollow trunk was at one time burnt out inside but thankfully the tree has recovered. 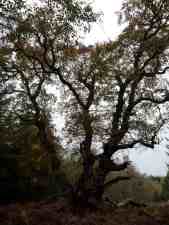 Radiohead’s most recent album ‘King of Limbs’ is thought to have been named after this tree. They recorded part of a previous album ‘In Rainbows’ at the nearby 18th Century Tottenham House and presumably paid it a visit while out in the woods.

I find it both inspiring and awesome to be in the presence of such an old living thing. I whole heartedly recommend getting out there and discovering an ancient tree close to you. If you do please send me some photo’s so we can share them with other tree huggers on this blog.

The Ancient Tree Hunt began in 2004, as a joint venture with the Tree register of the British Isles and the Ancient Tree Forum. It aims to involve thousands of people in finding and mapping all the fat, old trees across the UK and is right at the heart of the Woodland Trust’s ancient tree conservation work. It will create a comprehensive living database of ancient trees and it’s the first step towards cherishing and caring for them.

Ancient trees are living relics of incredible age that inspire in us feelings of awe and mystery. They have helped shape our history, and will help shape our future if we let them. Incredibly there are more ancient trees in Britain than any other country in Western Europe. In fact a churchyard in Scotland is thought to be home to the oldest living thing in Europe, the ‘Fortingall Yew’, thought to be 5000 years old! So why don’t you get out there and find some of our big old trees for yourself. Here are some useful websites and books to get you started.